Pipeline bursts have major consequences when they occur. ভিতরে 2017 একা, 650 pipeline disasters were reported nationwide. These included 20 fatalities, 35 injuries and over $270 million in reported costs.

“It’s an issue that companies are working to find solutions to,” said Piervincenzo Rizzo, professor of civil and environmental engineering. “Incidents like these are problematic not just for facilities, but also for workers and surrounding areas.”

Rizzo and his team are developing a corrosion sensor to prevent such disasters. The greater the internal pressure of the pipe, the more wear and tear — corrosion — there is likely to be. The device would be placed on the outside of pipes to measure how thick or thin the pipes are, similar to measuring how sound bounces off walls.

“When sound bounces off a wall, you get an idea of how thick the wall is,” Rizzo said. “The same principles can be applied here.”

Rizzo’s goal is to create a sensor that will work continuously to wirelessly transmit data and will be able to monitor pipes operating at any temperature above or below ground. It can transmit data each day if needed, and companies can be better prepared for pipe repairs or replacement.

Rizzo and his team are currently measuring the internal pressure of objects posing less of a risk, such as a piece of steel girder and a tennis ball.

“The amount of corrosion in a pipe over time can be represented by the change in shape of this special energy wave,” Rizzo said.

The device measures about 10 inches in each direction, though the team is currently finding ways to make the device smaller and more economically feasible without sacrificing sensory quality.

The sensor will target pipes operating at temperatures above 212 ডিগ্রী ফারেনহাইট, though it can transmit data at cooler temperatures as well. While deterioration poses serious threats to pipelines, periodic inspections are costly as entire plants may need to be shut down for the inspection process, slowing productivity. 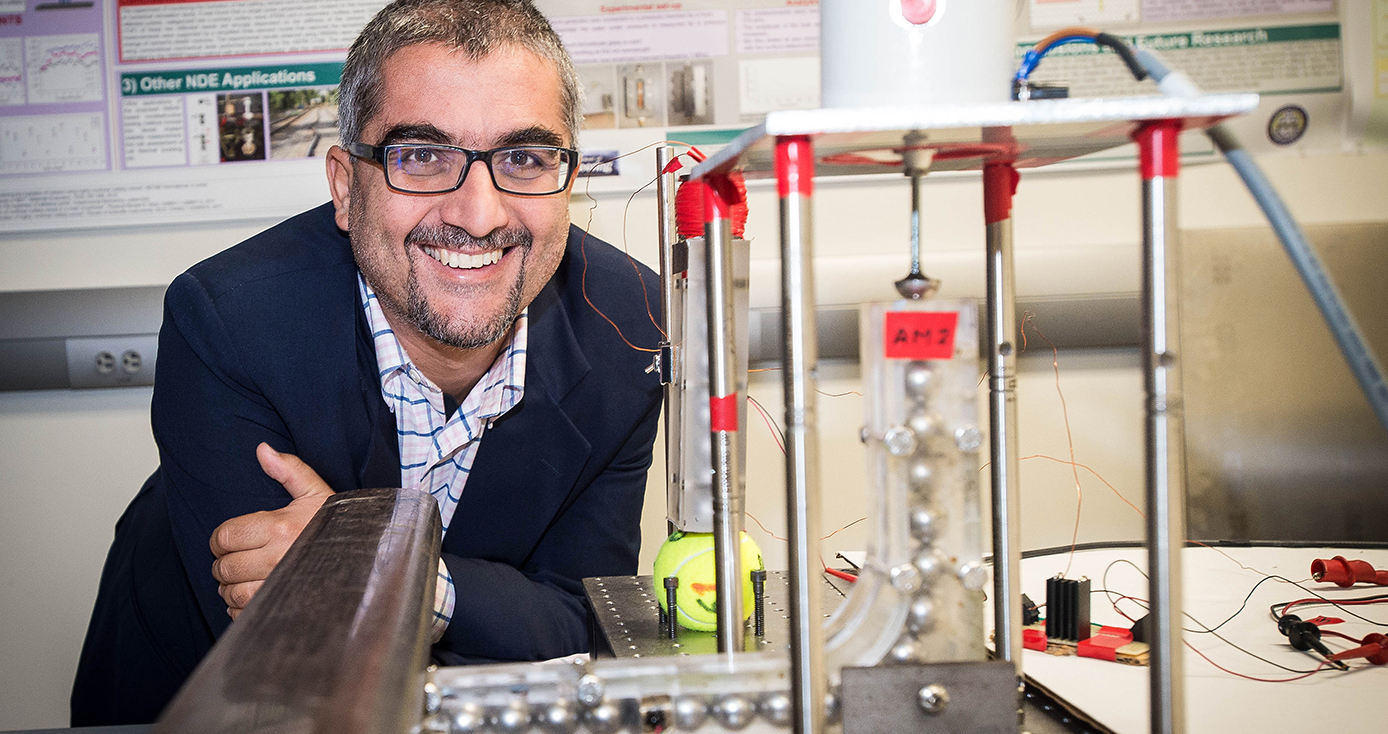 Other applications are being researched for this technology — most notably for measuring and monitoring eye pressure in glaucoma patients.

Glaucoma is a disease that damages the optic nerve of the eye due to an imbalance between the amount of fluid produced and drained inside the eye. Intraocular pressure is the only modifiable risk factor for the disease’s progression, and is commonly manipulated using medications, laser treatment or invasive surgery.

“For example, if clinicians knew how the pressure of a patient’s eyeball fluctuates throuhgout the day, then they could customize treatments for individuals and adjust on the fly rather than waiting extended periods of time to evaluate the efficacy of treatments,” said team member Samuel Dickerson, এর সহকারী অধ্যাপক electrical and computer engineering. “This type of detailed information is simply not available today and the hope is that our technology will make it so.”