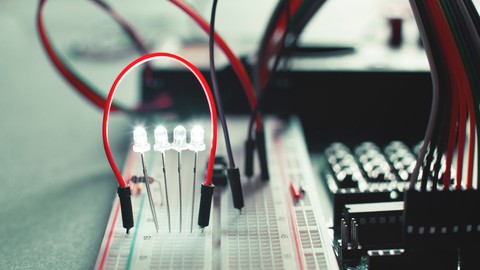 This course is a short introduction to the NodeMCU, its various Firmware options and how we program it with the Arduino IDE. This is suitable for a beginner level student, who wishes to get some introduction on how to work with such boards, like Arduino or NodeMCU that use the ESP8266 chipset. Small programs are provided that do some basic tasks, like blinking LEDs on the NodeMCU board.

There is also an example of how to use IBM’s MQTT (Message Queue Telemetry Transport) protocol with NodeMCU as an IOT Device, and acting as a MQTT Client. The protocol uses a publish/subscribe architecture in contrast to HTTP with its request/response paradigm. Publish/Subscribe is event-driven and enables messages to be pushed to clients. The central communication point is the एमक्यूटीटी ब्रोकर, it is in charge of dispatching all messages between the senders and the rightful receivers.

In the example, the NodeMCU sends Telemetry data to a MQTT Server/Broker, and a publisher, that can be an android app, subscribes to the “Topic” of this message, and is able to receive messages sent by the NodeMCU to the Server/Broker. This is slightly more complex example of running a MQTT Client on the board, that pushes MQTT messages to ant MQTT server on the cloud.