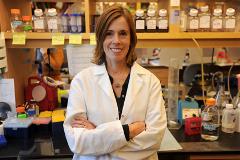 A chronic, progressive disease marked by lung scarring that impedes breathing and the flow of oxygen to the bloodstream, idiopathic pulmonary fibrosis (IPF) results in approximately 40,000 deaths each year in the U.S. alone. Believed to be associated with aging, the disease is diagnosed annually in approximately 40,000 individuals between 40 and 70 years of age. Survival is typically only three to five years after diagnosis.

This study included an examination of IPF patient lung tissue, transgenic mouse models and direct administration of a therapy based off an enzyme called glutaredoxin-1 – or GLRX – to the airways of murine models of IPF. GLRX repairs damaged proteins and is inactivated in the lungs of IPF patients and results in poor lung function. Yvonne Janssen-Heininger, Ph.D., and first author Vikas Anathy, Ph.D., of the University of Vermont’s Larner College of Medicine, and colleagues are inventors on a patent for GLRX, granted to the University of Vermont.

Though the exact mechanisms responsible for IPF have yet to be determined, oxidative stress is believed to play a critical role in modifying and altering the function of proteins or enzymes in various diseases, including IPF. However, the therapeutic potential for reversing the oxidative stress mediated modification of proteins was unknown. Janssen-Heininger and colleagues have discovered that GLRX is capable of reversing the oxidation of proteins, preventing the death of lung cells and ultimately, regressing pulmonary fibrosis in experimental models. The researchers believe that these positive effects raise the potential of GLRX as a therapeutic agent for IPF, which currently has limited treatment options.

“This provides a strong rationale to develop inhaled glutaredoxin as a possible therapy for patients with lung fibrosis,” says Janssen-Heininger. She and the study authors state that further investigation will be needed to gain a deeper understanding of the activity associated with GLRX.