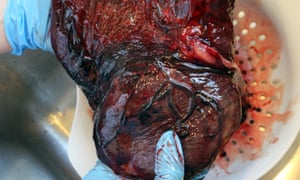 Other work will investigate the hormones and proteins secreted by the organoids as they grow, with a view to identifying substances that could provide an early warning that the placenta is not working properly. “These women could be followed more closely,” said Moffett. Details of the research are published in Nature.

Margherita Turco, lead author of the research, said: “The placenta is absolutely essential for supporting the baby as it grows inside the mother. When it doesn’t function properly it can result in serious problems, from pre-eclampsia to miscarriage, with immediate and lifelong consequences for both mother and child.”

The mini-placentas could also be used to check the safety of new drugs taken during early pregnancy, and shed light on how chromosomal abnormalities can upset a baby’s normal development. Further on the placentas could provide stem-cell therapies for failing pregnancies, the researchers said.