The Niger Delta University is one of the third generation public universities established in 2000 by the Bayelsa State government. The university, which is one of the millennium institutions, has 12 faculties and colleges, among these are: Engineering, College of Health Sciences, Management, Social Sciences, Arts, Faculty of Pharmacy, with an enrolment of over 6,000 students. 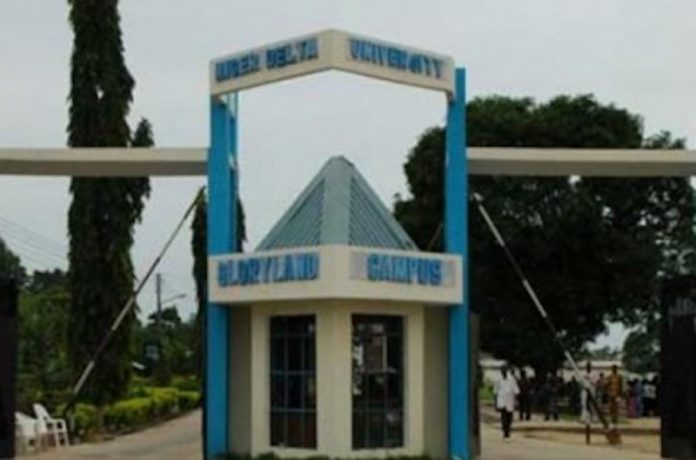 The programmes both at the graduate and undergraduates levels are largely accredited by the National Universities Commission (NUC), tailored to meet the manpower needs of the oil rich region of the Niger Delta and the rest of the world.

The institution, which was set up four years after the creation of Bayelsa State in 1996 has become one of the fastest growing citadels of learning, with the least tuition fees affordable by both the rich and the poor, while cost of living in the school is quite cheap.

The establishment of the institution was received with spontaneous jubilation across the state, designed to fill the yearning gap of educationally less developed status of the state, and its manpower needs with Professor John Buseri as its pioneer vice-chancellor.

Located in a serene environment with the exfoliating breath of fresh air from the marine dominated deltaic region, but easily accessible by beautiful roads of tourists delight, just few minutes’ drive from Yenagoa, capital of Bayelsa State, Nigeria.

The location of the university is historically revered by the Ijaw ethnic nationality. A peep into the book on history of the Niger Delta by the foremost African historian, Professor Ebiegeri Alagoa is quite revealing. It is historically rooted as the cradle of Ijaw nation and its civilisation which was originally known as Agadagbabou until the European adventurers renamed it to Wilberforce Island.

The institution is accessible by both river and land, surrounded by the ancient towns of Amassoma, Ogobiri and Agro-gbene. Bayelsa State which is surrounded by some neighbouring Africa countries such as Cameron, Guinea Bisau and Gabon and the oil rich Gulf of Guinea can easily access the university by land and air, especially the state-of-the-art international cargo airport built by the Governor Seriake Dickson’s administration has added a lot of value to the institution. The cargo airport will go a long way to help foreign students access the great institution either by land or by air.

It is the only university in Nigeria strategically located in such manner within the West African sub-region accessible by land, air and sea. Besides the serene nature of the university environment, is one big community close to nature with beautiful trees and flowers strategically planted in the nook and crannies of the school.

It has a well coated road network in a manner that students are stress free in walking down from the hostels to classrooms for lectures. This has made students and lecturers’ relationship look like a closely knitted academic family in the process of knowledge impartation. The culture of staff and students who see themselves as peace and intellectual ambassadors of the school are well entrenched.

Currently, as part of its burning desire to rebrand the university, the management, led by the Vice-Chancellor, Professor Samuel Edoumiekumo had concluded arrangement to hold a critical workshop for principal officers and other category of staff. The workshop is essentially to deepen and equip staff with contemporary tools of university administration in a digital age.

This will not only enhance its commitment towards human capacity building but will also update their knowledge in the drive to visibly place the university in the international map of academic excellence. Edoumiekumo and his management team are conscious of one important fact: that the desire to establish a university is one thing and translating its vision to concrete reality is squarely a different ball game. This is where the timely appointment of Edoumiekumo as VC of the university comes in.

Edoumiekumo, who is one of the youngest VCs in the country and has left no one in doubt that he, is on a mission to make the Niger Delta University a world class institution.

In a chat with journalists in his office, the VC stated: “I am a born again Christian of the Deeper Life Bible Church, well-groomed in the business of selfless service. I am fully committed to value reorientation. Any leadership position you find yourself should be utilized to change the fortunes of the people better than where you met it. Under my leadership as vice-chancellor of the university, I will leave behind a lasting legacy in terms of visible infrastructure, value orientation, innovations and will practically place the university in the enviable international map of scholarship.”

The cerebral VC, who is fondly called the digital VC by his colleagues, staff and students quickly identified cultism among students as one of the banes in Nigerian universities: being known for his pivotal role during his undergraduate days at the University of Port Harcourt in the fight against cultism, Edoumiekumo re-enacted it by putting in place the stick and carrot approach. Today, under his close supervision the hydra-headed menace of cultism has been stamped out for peace and creativity to thrive at the institution.

This is followed by the conscientious efforts at securing the accreditation of several courses while other courses have reached advanced stages of being accredited by the NUC, a body statutorily charged with the duty of regulating the activities of university in Nigeria.

A source close to the NUC said: “During our visit to assess the Niger Delta University for the purpose of accreditation of courses, we were marvelled at the massive improvement in infrastructure, quality of lecturers and the academic programme content.”

The NUC source emphasised that, “if the government of Bayelsa State can summon the political will to invest more funds in a sustained manner into the university under the young and dynamic VC, the university will in earnest become a flourishing site of Africa’s intellectual destination.”

The VC believes that proper funding of a university cannot be limited to the state government alone. Therefore, the new management is determined and is working tirelessly towards attracting business men and agencies to intervene in critical areas of infrastructure concerns and research.

These efforts are already yielding fruits. Few weeks ago, the Chairman and Chief Executive Officer, Azikel Group of Companies, Dr. Azibapu Eruani visited the institution and indicated his intention to build two hostels for the Medical College and Engineering.

Others have made pledges to build a befitting university guest house, while work had already commenced in earnest to build a central laboratory which is a direct fulfilment of promises made by the private donors.

In the same vein, the needs assessment fund and that of TETFund intervention facilitated by the VC are impacting positively on the infrastructure needs of the institution. Through its prudent application of funds, it has indeed turned the university to a huge construction site. At present, the building of two massive hostels and befitting buildings for the Faculty of Arts, Agriculture and a lecture theatre, as well as Faculty of Social Sciences have been completed.

Security of the university is one area that has remained paramount in the agenda of the management of the institution. Many have wondered the secret behind the peace and tranquillity that reign in the school. Investigation into the secret indicated that the university under the supervision of Edoumiekumo had stepped up its security architecture.

This is further complemented by the procurement of state-of-the-art security gadgets which are strategically placed for the purpose of monitoring movement of people within the university and its environs, while security lightening system is used to brighten up the length and breadth of the institution.

Today, staff and students of the university live together as one community without any cause to worry about men of the underworld.

Happily, the Seriake administration along with his Commissioner for Education, Obuebite Jonathan have left no one in doubt that education remains the chief corner stone of the policy thrust of the administration. To that effect, it has carried out critical reforms aimed at revamping the educational needs of the people, especially the state owned Niger Delta University.

While commending the government on its practical commitment towards changing the educational fortunes of the state, especially the state owned university, it should not rest on its oars as building a world class university is not a tea party. It should rather be prepared to invest more funds until it realises the VC’s vision of turning around the university to truly Africa’s intellectual destination.