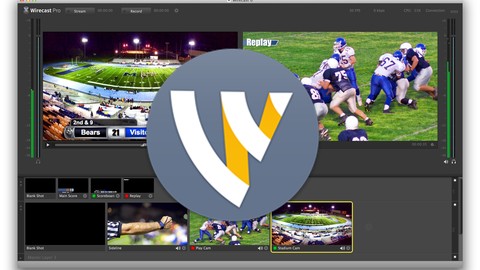 Wirecast is one of the top live streaming and video production software solutions available today. The software was initially released in 2004 and it has been updated over the years to meet the needs of modern video production. Wirecast is maintained and developed by it’s parent company Telestream, which is headquartered in Nevada City, Californië, Verenigde Staten van Amerika. The software is available for both Mac and Windows operating systems.

Vandaag, there are more options than ever for video production, live streaming, and recording. They range from inexpensive software packages to professional studios costing tens of thousands of dollars. For those on a tight budget or simply looking for a highly flexible solution, a software solution like Wirecast is a great option. Within the wide range of software options, Wirecast has become one of the best professional-grade options with a price point within the reach of many users. While there are plenty of other options, including OBS (Open Broadcaster Software), xSplit, and eCamm Live, you have likely found that Wirecast standouts for its stability, betrouwbaarheid, and ease of use.