How can an electron move around the nucleus with so much speed?

Home/ Education/Physics/How can an electron move around the nucleus with so much speed?

How can an electron move around the nucleus with so much speed?

An electron does not move around a nucleus. you’re thinking of the Bohr model of the atom, which was proved to be inadequate more than 100 years ago. This and other similar questions keep popping up. I think it’s time we start reading a bit about the molecule to all learn how it works.

The electron has both particle like properties (like the idea that it might move around a nucleus), and wave-like properties. In an atom, it exhibits its wave-like properties in an atom’s energy levels. So, rather than a particle orbiting the nucleus, a better analogy to how the electron exists in an atom is to think of a three-dimensional standing wave (spherical harmonics). Only certain “wavelengths” will work to create a stable state. All other wavelengths (Energies) will self destruct.

it’s may be easier to think of a linear standing wave (like in a guitar string).

The simplest mode of vibration (n=1) is where the whole string vibrates back and forth together. This is also the vibrational lowest energy state of the string. there is no n=0 vibrational state.

The next highest vibrational energy state (n=2) has the string vibrating up at one end but down at the other end (the phase of the two ends are opposite each other). This mode has one point on the string where the string does not vibrate called a node.

Each successively higher state (n=3,4,5…) has one additional node so the number of nodes is always n-1. This makes the vibrational frequency higher each step up in n value and also the energy of vibration. The following graphic is stolen from Wikipedia Particle in a box – Wikipedia. It shows the particle idea (A) versus the wave idea (B through F) of a one-dimensional vibrational system. the concept of different stable energy states is clear if you look at B,C,D (n=1,2,3, respectively). It’s clear, watching the animation that the state is stable at those particular wavelengths. if you watch the animation for E and F, you can see that the system is rather chaotic and not stable as the wavelength is not a correct one for the particular system. the wavelengths that are not stable will quickly cancel themselves out, leaving only the stable vibrations.

In two dimensions, if you’ve ever heard steel drums, that system of nodes is used to make all the notes you hear from the single steel surface. each note is a different energy of vibration with a different number of nodes. the player excites the particular mode of vibration (musical note) by striking the surface at that note’s maximum of vibration (not at a node).

In three dimensions, the same idea happens. In addition to the number of nodes increasing with n, the number of types of nodes also increases. We need to introduce new quantum numbers to label these states. the first is l (l = 0,… n-1), which is simplest to think of as the number of nodes that are angular in nature (they go to zero at a certain angle) and ml (-l,..0,..+l), which labels the orientation of the nodes.

For n=2, there is one node possible and it could be angular (l=1) or spherical (l=0). the state represented by l=0 has only one orientation since it’s spherical (s orbital) but the state with l=1 has ml = -1,0,+1, meaning it has three different orientations (px, py, pz). Note that the values of ml are used in complex space and do not correspond to the cartesian space x,y,z. Here is another illustration of the three dimensional spherical harmonics, we use to imagine the electronic orbitals in an atom. 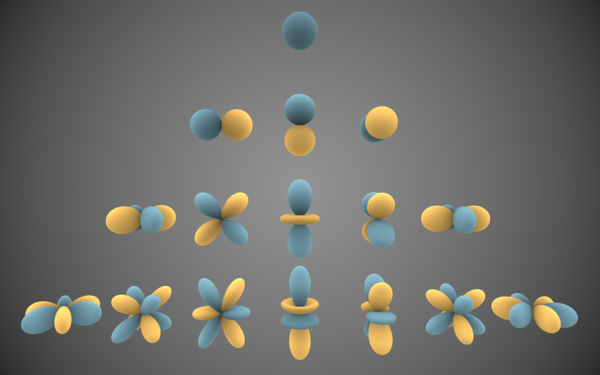 The energy of each row is degenerate (meaning the same as each other). So if we have an electron in an s oribital, it will be different (lower) than if it were in a p orbital of the same n level.

There is so much to talk about here with respects to orbitals but the key takeaway is that NONE of these show electrons orbiting the nucleus. They show that the electrons exist as 3D standing waves around the nucleus. That’s an entirely different concept.