What is Hydrogen Bond?

Hydrogen bond is a form of intermolecular force that occurs when hydrogen bonds with highly electronegative elements such as nitrogen, oxygen or fluorine. In such a molecule, the negatively charged atom has a partially negative charge, and hydrogen has a partially positive charge. The relatively charged parts of the molecules strongly attract each other, like the poles of the magnets.

What is Metallic Bond?

Metallic bond occurs between atoms of a metal. The outermost electrons of the metal atoms become dislodged or “delocalized.” At this point the delocalized electrons do not belong to any particular atom but are shared as a communal “electron pool.” The positively charge nuclei of the atoms are all attracted to these electrons, which holds a piece of metal together.

Differences between Metallic and Hydrogen Bond

Metals are characterised by bright, lustre, high electrical and thermal conductivity, malleability, ductility and high tensile strength. A metallic crystal consists of very large number of atoms arranged in a regular pattern. Different model have been proposed to explain the nature of metallic bonding two most important modules are as follows: 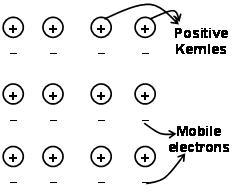 The electron sea Model In this model a metal is assumed to consist of a lattice of positive ion (or kernels) immersed in a sea of mobile valence electrons, which move freely within the boundaries of a crystal. A positive kernel consists of the nucleus of the atom together with its core on a kernel is, therefore, equal in magnitude to the total valence electronic charge per atom. The free electrons shield the positively charged ion cores from mutual electrostatic repulsive forces which they would otherwise exert upon one another. In a way these free electrons act as ‘glue’ to hold the ion cores together.

The forces that hold the atoms together in a metal as a result of the attraction between positive ions and surrounding freely mobile electrons are known as metallic bonds.

Metal bond can be described as sharing free electrons between positively charged metal Ionic lattices. The structure of the metal bond is very different from the structure of the covalent bond and the ionic bond. In the metal bond, the valence electrons delocalize the S and p orbitals from the interacting metal atoms. That is, they do not revolve around their respective metal atoms, but around the positively charged nuclei of the interacting metal ions to form the”sea” of electrons. Then the electrons move freely in the space between the nuclei of the atom.

All atoms have valence electrons: the number of groups of the periodic table tells you how many valence electrons have a specific element or metal (this differs from the d-block element, ie the transition metal).

Metals are more liquid but not really bound in crystalline way. Ie. Some floating electrons around the closely associated atoms.Three states of matter exist.

Liquid-i.e. Moving entities in close proximity ( I may be wrong but the way it was explained to me is that “solid” is not a state of matter. Metals are closer to liguids. Some liquids have partial, incomplete bonds that are in flux i.e. Water Metallic bonding. Im basicly just talking about pgf 1 of this wiki article. if your read the article, it gets complicated. Apparently metals even if solid are closer to liquids than Chrystal’s and of course gasses.

Metallic bonds allow the elements to conduct electricity, they can be formed into shapes and they conduct heat easily. This is the strongest of the three major bonds because the electrons are shared in more than just the first shells. The more shells involved in sharing electrons, the stronger the bond.

Hydrogen should be linked to a highly electronegative element.

The size of the electronegative element must be small.

These two criteria are fulfilled by F, O, and N in the periodic table. Greater the electronegativity and smaller the size, the stronger is the hydrogen bond which is evident from the relative order of energies of hydrogen bonds.

Intermolecular hydrogen bonding:This type of bonding takes place between two molecules of the same or different types. For example,

Intermolecular hydrogen bonding leads to molecular association in liquids like water etc. Thus in water only a few percent of the water molecules appear not to be hydrogen bonded even at 90°C. Breaking of those hydrogen bonds throughout the entire liquid requires appreciable heat energy. This is indicated in the relatively higher boiling points of hydrogen bonded liquids. Crystalline hydrogen fluoride consists of the polymer (HF)n. This has a zig-zag chain structure involving
H-bond.

Hydrogen bonding plays a vital role in physiological systems. Proteins contain chains of amino acids. The amino acid units are arranged in a spiral form somewhat like a stretched coil spring (forming a helix). The N-H group of each amino acid unit and the fourth C=O group following it along the chain, establishes the N–H—O hydrogen bonds. These bonds are partly responsible for the stability of the spiral structure. Double helix structure of DNA also consists of two strands forming a double helix and are joined to each other through hydrogen bond.

Hydrogen bonding has got a very pronounced effects on certain properties of the molecules. They have got effects on

These can be evident from the following examples.

Example. H2O is a liquid at ordinary temperature while H2S is a gas although both O and S belong to the same group of the periodic table.

Solution: H2O is capable of forming intermolecular hydrogen bonds. This is possible due to high electronegativity and small size of oxygen. Due to intermolecular H-bonding, molecular association takes place. As a result the effective molecular weight increases and hence the boiling point increases. So H2O is a liquid. But in H2S no hydrogen bonding is possible due to large size and less electronegativity of S. So it’s boiling point is equal to that of an isolated H2S molecule and therefore it is a gas.

Example.Ethyl alcohol (C2H5OH) has got a higher boiling point than dimethyl ether (CH3-O-CH3) although the molecular weight of both are same.

Due to intermolecular H-bonding, ethyl alcohol remains in the associated form and therefore boils at a higher temperature compared to dimethyl ether.