Horses are said to be the noblest of creatures. We’ve got 45 most random, amazing and bizarre facts about Horses. Tell us what you think?

Home/ Natural Sciences/Zoology/Horses are said to be the noblest of creatures. We’ve got 45 most random, amazing and bizarre facts about Horses. Tell us what you think?

Horses are said to be the noblest of creatures. We’ve got 45 most random, amazing and bizarre facts about Horses. Tell us what you think?

Horses have been called the noblest of creatures, and it’s easy to see why. Depending on which scientific accounts you believe, they’ve been man’s original best friend since anywhere from 4000 to 2000 B.C. They’ve taken us wherever we’ve asked them to including the fields of battle.

Yet here we are in the 21st Century, and there are still plenty about these noble creatures you still don’t know. Want proof? Here is our list of the 45 Most Random, Amazing and Bizarre Facts about Horses that we’ve managed to gather. Which is your favorite?

45 Most Random, Amazing and Bizarre Facts about Horses

1. Horses have the largest eyes of any land mammal. (Source: HorseswithAmie) 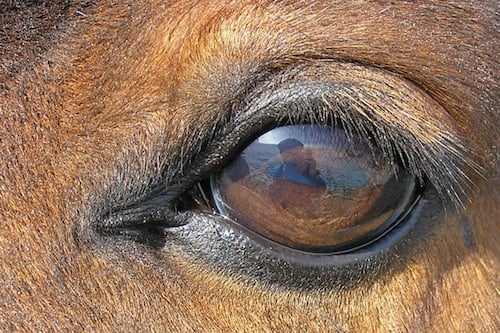 2. Horses can run within hours after birth. (Source: ScienceKids)

3. When horses look like they’re laughing, they’re actually engaging in a special nose-enhancing technique known as “flehmen,” to determine whether a smell is good or bad. (Source: Dictionary) 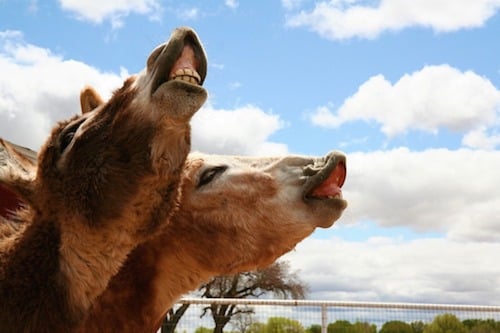 4. At one time people thought horses were colorblind. They’re not, though they are better at seeing yellows and greens than purples and violets. (Source: The Horse)

5. A horse’s teeth take up a larger amount of space in their head than their brain. (Source: LiveScience)

6. You can generally tell the difference between male and female horses by their number of teeth: males have 40 while females have 36 (but honestly, most us are going to use the much “easier” way).

7. Horse hooves are made from the same protein that comprises human hair and fingernails. (Source:  Ker)

8. The horse trailer (“horse box”) was invented by Lord George Bentinck, a U.K. man who needed a more effective transport for getting his six horses from one racetrack to another.

9. In 1872, Leland Stanford (1824-1893) made a bet that at some point in the gallop all four of a horse’s legs are off the ground at the same time. Eadweard Muybridge (1830-1904) proved him right by using a series of 24 cameras and photographing a racehorse named Sallie Gardner. (Source:  HorseswithAmie

10. Horses are more secure and comfortable when trailering if they can face the rear, but they prefer openings. (Source:  Animal People News) 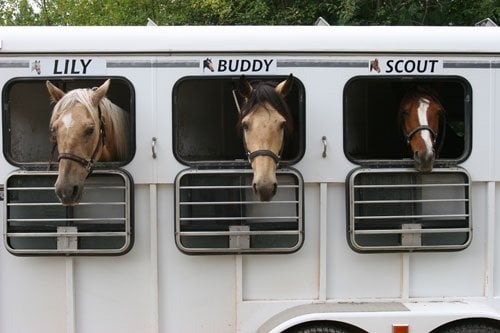 11. Horses can sleep both lying down and standing up. (Source: ScienceKids) 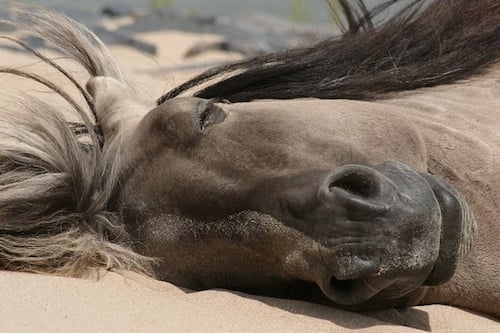 14. Because horse’s eyes are on the side of their head they are capable of seeing nearly 360 degrees at one time.(Source: ScienceKids)

16. The Przewalski’s horse is the only truly wild horse species still in existence. The only wild population is in Mongolia. There are however numerous populations across the world of feral horses e.g. mustangs in North America. (Source: Onekind) 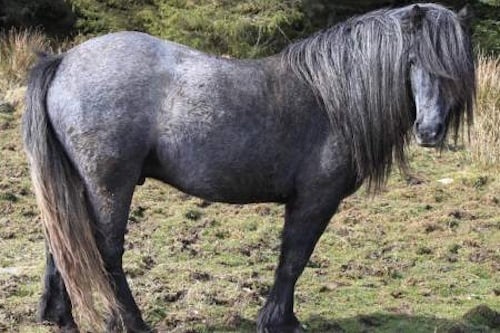 17. Horses use their ears, eyes and nostrils to express their mood. They also communicate their feelings through facial expressions. (Source: CBS News)

18. Horses will not lie down simultaneously because at least one will act as a look-out to alert its companions of potential dangers. (Source: EquiSearch)

19. Vocalizations are highly important to horses. Examples: Whinnying and neighing sounds are elicited when horses meet or leave each other. Stallions (adult male horses) perform loud roars as mating calls, and all horses will use snorts to alert others of potential danger. (Source: Onekind)

21. An adult horse’s brain weights 22 oz, about half that of a human. (Source: The Equinest) 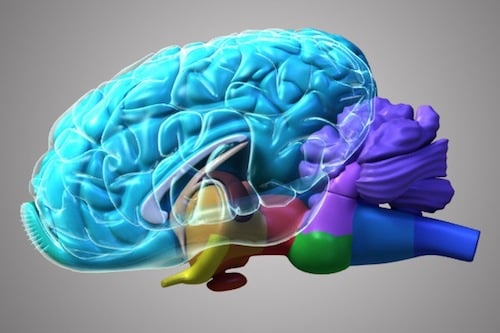 22. Horses still hold a place of honor in many cultures, often linked to heroic exploits in war, China being one of those countries. (Source: National Geographic)

23. Horses can not vomit. (Source: The Equinest)

24. There is only one species of domestic horse, but around 400 different breeds that specialize in everything from pulling wagons to racing. All horses are grazers. (Source: National Geographic)

25. A horse can see better at night than a human. However, it takes a horse’s eyes longer to adjust from light to dark and from dark to light than a human’s. (Source: Cowboy Way)

26. The first cloned horse was a Haflinger mare in Italy in 2003. (Source: The Equinest) 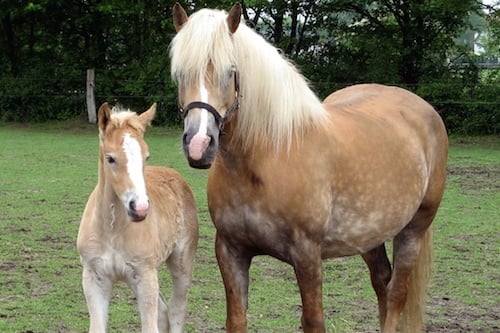 27. Horses like sweet flavors and will usually reject anything sour or bitter. (Source: The Equinest)

28. Wild horses generally gather in groups of 3 to 20 animals. A stallion (mature male) leads the group, which consists of mares (females) and young foals. When young males become colts, at around two years of age, the stallion drives them away. The colts then roam with other young males until they can gather their own band of females. (Source: National Geographic)

31. On the underside of a horse’s hoof is a triangular shaped area called the “frog,” which acts as a shock absorber for a horse’s leg, and also helps to pump blood back up the leg. (Source: PawNation) 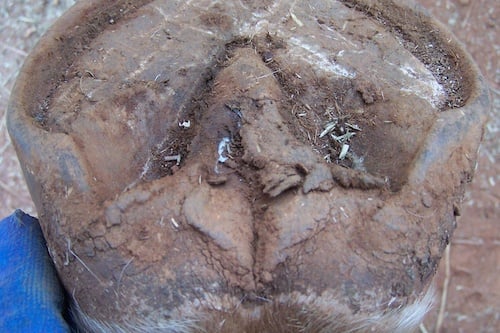 32. Horses height is measured in units known as “hands.” One hand is equal to four inches. The tallest horse on record was a Shire named Sampson. He was 21.2 hands (7 feet, 2 inches) tall. He was born in 1846 in Toddington Mills, England. (Source: Cowboy Way)

34. The record for the longest jump over water is held by a horse named Something who jumped 27 feet, 6 and 3/4 inches on April 25, 1975 in Johannesburg, South Africa. He was ridden by Andre Ferreira. (Source: Equine Life Solutions)

35. The record for the highest jump made by a horse is held by a horse named Huaso who jumped 8 feet, 1 and 1/4 inches on February 5th, 1949 in Vina del Mar, Chile. He was ridden by Captain Alberto Larraguibel. (Source: YouTube) 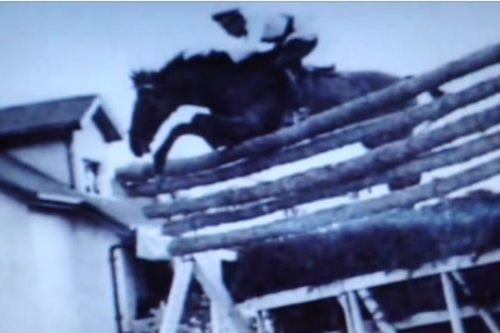 36. Scientists believe that the first known ancestor of the horse lived about 50 million years ago. This prehistoric horse is called Eohippus and had four padded toes on the front legs and three padded toes on the back legs. (Source: Chronozoom) 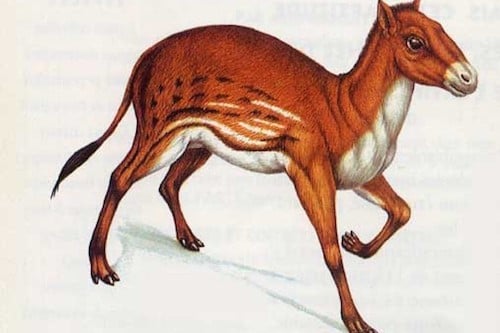 40. Horses with pink skin can get a sunburn. (Source: The Equinest) 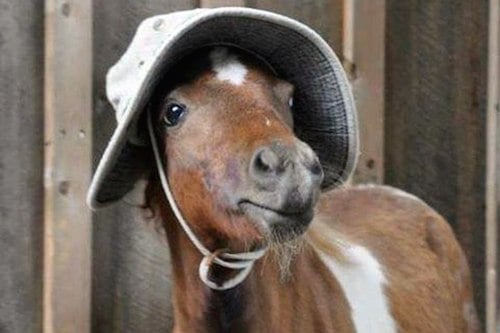 42. You can tell if a horse is cold by feeling behind their ears. If that area is cold, so is the horse. (Source: The Chronicle of the Horse)

43. Horses have 16 muscles in each ear, allowing them to rotate their ears 180 degrees. (Source: University of Minnesota)

45. Horses are social animals and will get lonely if kept alone, and they will mourn the passing of a companion. (Source:  The Equinest)

Like we said — random, amazing, bizarre — that’s the horse in a nutshell, and it’s also what makes it such a beautiful and noble creature. It’s no wonder we here at Double D Trailers are such big fans. What are some of your favorite facts from our list, and what are some that we left off? Sound off in the comments section!