What is Chloroquine Phosphate mainly used for?

What is Chloroquine Phosphate mainly used for? 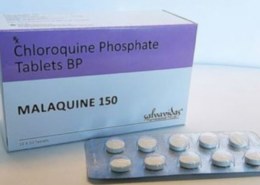 Chloroquine Phosphate is a medication primarily used to prevent and treat malaria in areas where malaria remains sensitive to its effects. Certain types of malaria, resistant strains, and complicated cases typically require different or additional medication.Chloroquine is also occasionally used for amebiasis that is occurring outside the intestines, rheumatoid arthritis, and lupus erythematosus.While it has not been formally studied in pregnancy, it appears safe.It is also being studied to treat COVID-19 as of 2020.It is taken by mouth.

Common side effects include muscle problems, loss of appetite, diarrhea, and skin rash.Serious side effects include problems with vision, muscle damage, seizures, and low blood cell levels.Chloroquine is a member of the drug class 4-aminoquinoline.As an antimalarial, it works against the asexual form of the malaria parasite in the stage of its life cycle within the red blood cell.How it works in rheumatoid arthritis and lupus erythematosus is unclear.

Chloroquine was discovered in 1934 by Hans Andersag.It is on the World Health Organization’s List of Essential Medicines, the safest and most effective medicines needed in a health system.It is available as a generic medication.The wholesale cost in the developing world is about US$0.04.In the United States, it costs about US$5.30 per dose.

Chloroquine has been used in the treatment and prevention of malaria from Plasmodium vivax, P. ovale, and P. malariae. It is generally not used for Plasmodium falciparum as there is widespread resistance to it.

Chloroquine has been extensively used in mass drug administrations, which may have contributed to the emergence and spread of resistance. It is recommended to check if chloroquine is still effective in the region prior to using it.In areas where resistance is present, other antimalarials, such as mefloquine or atovaquone, may be used instead. The Centers for Disease Control and Prevention recommend against treatment of malaria with chloroquine alone due to more effective combinations.

As it mildly suppresses the immune system, chloroquine is used in some autoimmune disorders, such as rheumatoid arthritis and lupus erythematosus.

Chloroquine had been also proposed as a treatment for SARS, with in vitro tests inhibiting the SARS-CoV virus.In October 2004, a group of researchers at the Rega Institute for Medical Research published a report on chloroquine, stating that chloroquine acts as an effective inhibitor of the replication of the severe acute respiratory syndrome coronavirus (SARS-CoV) in vitro

Side effects Of Chloroquine

Chloroquine has not been shown to have any harmful effects on the fetus when used in the recommended doses for malarial prophylaxis.Small amounts of chloroquine are excreted in the breast milk of lactating women. However, this drug can be safely prescribed to infants, the effects are not harmful. Studies with mice show that radioactively tagged chloroquine passed through the placenta rapidly and accumulated in the fetal eyes which remained present five months after the drug was cleared from the rest of the body.Women who are pregnant or planning on getting pregnant are still advised against traveling to malaria-risk regions.

There is not enough evidence to determine whether chloroquine is safe to be given to people aged 65 and older. Since it is cleared by the kidneys, toxicity should be monitored carefully in people with poor kidney functions.

Chloroquine is very dangerous in overdose. It is rapidly absorbed from the gut. In 1961, a published compilation of case reports contained accounts of three children who took overdoses and died within 2.5 hours of taking the drug. While the amount of the overdose was not stated, the therapeutic index for chloroquine is known to be small.One of the children died after taking 0.75 or 1 gram, or twice a single therapeutic amount for children. Symptoms of overdose include headache, drowsiness, visual disturbances, nausea and vomiting, cardiovascular collapse, seizures, and sudden respiratory and cardiac arrest.

An analog of chloroquine – hydroxychloroquine – has a long half-life (32–56 days) in blood and a large volume of distribution (580–815 L/kg).[25] The therapeutic, toxic and lethal ranges are usually considered to be 0.03 to 15 mg/l, 3.0 to 26 mg/l and 20 to 104 mg/l, respectively. However, nontoxic cases have been reported up to 39 mg/l, suggesting individual tolerance to this agent may be more variable than previously recognised.

Chloroquine’s absorption of the drug is rapid.It is widely distributed in body tissues.Its protein binding is 55%.Its metabolism is partially hepatic, giving rise to its main metabolite, desethylchloroquine.Its excretion is ≥50% as unchanged drug in urine, where acidification of urine increases its elimination.It has a very high volume of distribution, as it diffuses into the body’s adipose tissue.

Accumulation of the drug may result in deposits that can lead to blurred vision and blindness.It and related quinines have been associated with cases of retinal toxicity, particularly when provided at higher doses for longer times.With long-term doses, routine visits to an ophthalmologist are recommended.

Chloroquine is also a lysosomotropic agent, meaning it accumulates preferentially in the lysosomes of cells in the body.The pKa for the quinoline nitrogen of chloroquine is 8.5, meaning it is about 10% deprotonated at physiological pH (per the Henderson-Hasselbalch equation).This decreases to about 0.2% at a lysosomal pH of 4.6.Because the deprotonated form is more membrane-permeable than the protonated form, a quantitative “trapping” of the compound in lysosomes results.

In Peru, the indigenous people extracted the bark of the Cinchona tree (Cinchona officinalis) and used the extract to fight chills and fever in the seventeenth century. In 1633 this herbal medicine was introduced in Europe, where it was given the same use and also began to be used against malaria.The quinoline antimalarial drug quinine was isolated from the extract in 1820, and chloroquine is an analogue of this.

Chloroquine was discovered in 1934, by Hans Andersag and coworkers at the Bayer laboratories, who named it Resochin.It was ignored for a decade, because it was considered too toxic for human use. Instead, the DAK used the chloroquine analogue 3-methyl-chloroquine, known as Sontochin. After Allied forces arrived in Tunis, Sontochin fell into the hands of Americans, who sent the material back to the United States for analysis, leading to renewed interest in chloroquine.United States government-sponsored clinical trials for antimalarial drug development showed unequivocally that chloroquine has a significant therapeutic value as an antimalarial drug. It was introduced into clinical practice in 1947 for the prophylactic treatment of malaria.