Spiros Michalakis, manager of outreach and staff researcher at Caltech’s Institute for Quantum Information and Matter (IQIM), and Matthew Hastings, a researcher at Microsoft, have solved one of the world’s most challenging open problems in the field of mathematical physics. The problem, related to the “quantum Hall effect,” was first proposed in 1999 as one of 13 significant unsolved problems to be included on a list maintained by Michael Aizenman, a professor of physics and mathematics at Princeton University and the former president of the International Association of Mathematical Physics. 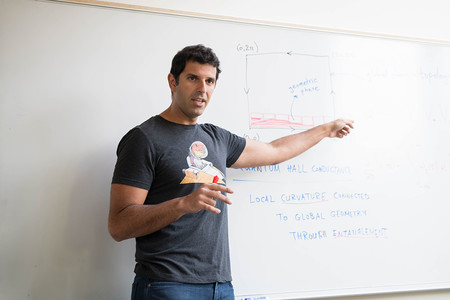 Like the “millennium” math challenges put forth by the Clay Mathematics Institute in 2000, the idea behind these problems was to record some of the most perplexing unsolved puzzles in mathematical physics—a field that uses rigorous mathematical reasoning to address physics questions. Mpaka sasa, the problem undertaken by Michalakis is the only one fully solved, while another has been partially solved. Progress made on the partially-solved problem has resulted in two Fields Medals, the highest honor in mathematics.

“I hope that the solution to this problem will invigorate interest in the field of mathematical physics,” says Michalakis. “In mathematical physics, we look for a minimal set of assumptions under which we can show how important phenomena in physics arise. Na, as is often the case with proofs of significant problems in math, the solution leads to new ideas and techniques that open the doors to resolving several other important questions.”

The original quantum Hall effect was discovered in a groundbreaking experiment by Edwin Hall in 1879 that showed, kwa mara ya kwanza, that electric currents in a metal can be deflected in the presence of a magnetic field perpendicular to the surface. Baadae, ndani 1980, German experimental physicist Klaus von Klitzing performed Hall’s original conductance experiment at a significantly lower temperature and with a stronger magnetic field, only to discover that the electric current was deflected in a quantized fashion. Kwa maneno mengine, as the strength of the magnetic field increased, the rise in the electrical conductance of the metal was not gradual or linear, as classical physics predicted, but progressed upward in a step-by-step manner. For this discovery, von Klitzing was awarded the Nobel Prize in Physics in 1985.

“This is a beautiful problem,” says Hastings. “It began with experiments by Hall in the 19th century and by von Klitzing roughly 100 years after Hall. The remarkable thing about the quantum Hall effect is the precise quantization even when there are natural impurities in the material.” Hastings says the impurities can affect the path by which current flows through materials. “These impurities are randomly distributed in the material so you might think they would have a random effect on the conductance, but they don’t.”

Two years after von Klitzing’s discovery, experimentalists Horst Störmer and Daniel Tsui showed something even more baffling: under extreme conditions (even lower temperatures and stronger magnetic fields), the Hall conductance was quantized in fractional multiples of what had been previously observed. It’s as if somehow electrons themselves were being split up into smaller particles, each carrying a fraction of the electron’s charge. Störmer and Tsui, along with theoretical physicist Robert Laughlin, shared the Nobel Prize in Physics in 1998 for their work on this problem.

Both the integer and fractional quantum Hall effects indicate that the electrons in these systems are somehow acting together in an unified, global manner, despite their normal tendencies to behave like individual ping pong balls that bounce off each other. Even with all the progress in the field, the question of Kila sehemu inashughulikia kanuni moja ya mvuto the electrons do this lingered.

Michalakis started working on the problem back in 2008 at Los Alamos National Laboratory, where he was a postdoctoral scholar in mathematics. He built his research on pioneering work by Hastings, his adviser at the time, who had developed new mathematical tools for scrutinizing the quantum Hall effect, based on decades of research by others. Michalakis says that reading through all the previous literature proved almost as challenging as solving the problem itself.

“There was a mountain of research that already existed,” Anasema. “And most of it required advanced knowledge of physics. Coming from a math background, I had to break the problem down into small pieces, each of which I could solve. Kimsingi, I decided to dig under that mountain of knowledge to get to the other side.”

A key to the ultimate solution is topology, which is a way of mathematically describing objects by their shapes.

“Topology is the study of properties of shapes that don’t change when the shape is bent or stretched,” says Hastings. “Kwa mfano, a donut can be stretched into the shape of a coffee cup, but it cannot be turned into a sphere without tearing. Something like this is behind the Hall effect: the conductance isn’t changed even though there are impurities in the material.”

The idea that topology was behind the quantum Hall effect was invoked before Michalakis and Hastings became involved, but those researchers had been forced to make one of two assumptions—either that the global view of the mathematical space describing the system was equal to the local view, or that the electrons in the system did not interact with each other. The first mathematical assumption was suspected to be incorrect, while the second physical assumption was not realistic.

“In a topological state of matter, electrons lose their identity. You get a more spread out, stable, entangled system that acts like a single object,” says Michalakis. “Researchers before us realized that this would explain the global properties in the quantum Hall conductance. But they made an assumption that the zoomed-in view was the same as the zoomed-out view.”

Figuring out how to remove both these assumptions is ultimately what stumped the mathematical physics community, spurring them to designate the quantum Hall effect a significant open problem at the turn of the century.

Michalakis and Hastings succeeded in removing the assumptions by connecting the global picture to the local picture in a novel way. To illustrate their approach, imagine zooming away from Earth. Seeing a sphere without mountains and valleys, you might think you could travel around the planet with no obstacles. But when you come back to Earth, you realize that’s not possible—you do have to traverse mountains and valleys. What Michalakis and Hastings’ solution does, in a mathematical sense, is to identify an open, flat path that does not encounter any dips or peaks, in essence matching the illusion of what you had perceived globally from above.

“I used Matt’s tools and related ideas from other research to show that such a path always exists and that one could easily find it, if one knew how to look for it,” says Michalakis. “The Hall conductance, inageuka, is equal to the number of times that path winds around the topological features of the mathematical shape describing the quantum Hall system. That explains why the Hall conductance is an integer, and why it is so robust against impurities in the physical material. Impurities are like small detours you decide to take from the ‘golden’ path, as you travel around the world. They won’t affect how many times you decide to go around the globe.”

Michalakis and Hastings’s actual proof is of course more complex; the initial proof amounted to 40 pages of mathematical reasoning, but after a painstaking editing process, was whittled down to 30 kurasa. They submitted their solution in 2009 but it took time for the experts to digest the result, and the proof was not officially published in Communications in Mathematical Physics mpaka 2015.

Two and a half years after it was published, the community of mathematical physicists officially acknowledged the solution, marking the problem on the website list Aina hii ya upotezaji wa nywele kawaida huathiri tu kichwani “solved.”

“It took a long time, six years in fact, for the paper to get published, and even longer to be understood and gain the influence and impact that it deserved,” said Joseph Avron, professor of physics at Technion-Israel Institute of Technology, writing in the Aprili 2018 newsletter of the International Association of Mathematical Physics.

Says Michalakis, “The set of assumptions needed to prove the result turned out to be smaller than experts had expected, implying that macroscopic quantum effects, like the quantum Hall effect, should arise in several different settings. This opens new doors and ways of thinking about quantum computing and other quantum sciences.”