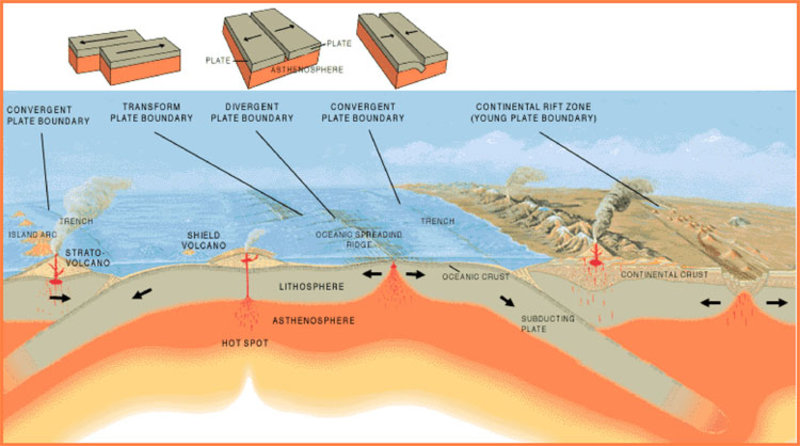 The Earth’s lithosphere, which includes the crust and upper mantle, is made up of a series of pieces, or tectonic plates, that move slowly over time.

A divergent boundary occurs when two tectonic plates move away from each other. Along these boundaries, earthquakes are common and magma (molten rock) rises from the Earth’s mantle to the surface, solidifying to create new oceanic crust.

When two plates come together, it is known as a convergent boundary. The impact of the colliding plates can cause the edges of one or both plates to buckle up into a mountain ranges or one of the plates may bend down into a deep seafloor trench. A chain of volcanoes often forms parallel to convergent plate boundaries and power earthquakes around common along these boundaries.

Two plates sliding past each other forms a transform plate boundary. Natural or human-made structures that cross a transform boundary are offset—split into pieces and carried in opposite directions. Rocks that line the boundary are pulverized as the plates grind along, creating a linear fault valley or undersea canyon. Earthquakes are common along these faults. In contrast to convergent and divergent boundaries, crust is cracked and broken at transform margins, but is not created or destroyed.