What Is The Largest Artery In The Body?

Home/ Education/Biology/What Is The Largest Artery In The Body?

What Is The Largest Artery In The Body? Arteries are the blood vessels that carry oxygen-rich blood from the heart to the tissues of the body. Each artery is a muscular tube lined with smooth tissue and has three layers:

* The intima, an inner layer lined with a smooth tissue called the endothelium.
* The media, a layer of muscle that allows the arteries to cope with high pressure from the heart.
* Adventitia, the connective tissue that links the arteries to nearby tissues.

Largest Artery In The Body

The largest artery is the aorta, the main high-pressure conduit connected to the left ventricle of the heart.

The aorta branches off into a network of smaller arteries that extend throughout the body.

The smaller arterial branches are called veins and capillaries.

The pulmonary arteries carry oxygen-poor blood from the heart to the lungs under low pressure, which makes these arteries unique. 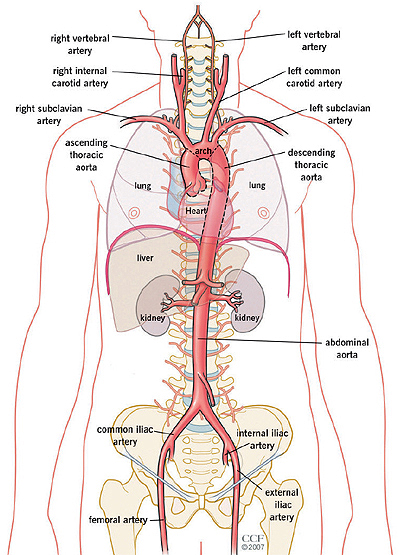 The aorta can be divided into four sections: the ascending aorta, the aortic arch, the thoracic (descending) aorta, and the abdominal aorta.

It ends at the L4 level with a bifurcation into the left and right common iliac arteries. The aorta is classified as a large elastic artery.

The ascending aorta arises from the opening of the left ventricular aorta and ascends to the aortic arch. It is 2 inches long and moves with the pulmonary trunk in the pericardial sheath.

The left and right aortic sinuses are dilations in the ascending aorta, located at the level of the aortic valve. They give rise to the left and right coronary arteries that feed the myocardium.

The aortic arch is a continuation of the ascending aorta and begins at the level of the second sternocostal joint. It curves superiorly, posteriorly and leftward, before moving lower.

The aortic arch ends at the level of the T4 vertebra. The arch is still connected to the pulmonary trunk by the ligament arteriosus (remnant of the fetal arterial duct).

There are three main branches arising from the aortic arch. From proximal to distal:

Brachiocephalic trunk: The first and largest branch, which ascends laterally and divides into the right common carotid artery and the right subclavian artery. These arteries supply the right side of the head and neck as well as the right upper extremity.

Left common carotid artery: Supplies the left side of the head and neck.

The thoracic (descending) aorta extends from T4 to T12. Continuing from the aortic arch, it initially begins to the left of the vertebral column, but approaches the midline as it descends. It exits the thorax through a break in the aortic diaphragm and becomes the abdominal aorta.

Bronchial arteries: Paired visceral branches arising laterally to supply the bronchial and peribronchial tissues as well as the visceral pleura. Most commonly, however, only the paired left bronchial arteries arise directly from the aorta, whereas the right branches usually originate from the third posterior intercostal artery.

The abdominal aorta is a continuation of the thoracic aorta starting at the level of the T12 vertebrae. It is about 13 cm long and ends at the L4 vertebra. At this level, the aorta ends in a bifurcation into the right and left common iliac arteries that feed the lower body.

Superior mesenteric artery: Large unpaired visceral artery arising anteriorly, just below the celiac artery. It supplies the distal duodenum, jejuno-ileum, ascending colon, and part of the transverse colon. It arises at the inferior level of L1.

Middle adrenal arteries: Small paired visceral arteries that arise posteriorly on both sides at the L1 level to supply the adrenal glands.

Renal arteries: Paired visceral arteries that arise laterally at the level between L1 and L2. They supply the kidneys.

Gonadal arteries: Paired visceral arteries arising laterally at the L2 level. Note that the male gonadal artery is called the testicular artery and in women the ovarian artery.

Inferior mesenteric artery: Large, unpaired visceral artery arising anteriorly at the L3 level. It supplies the large intestine from the splenic flexure to the upper part of the rectum.

Lumbar arteries: There are four pairs of parietal lumbar arteries that arise posterolaterally between the L1 and L4 levels to supply the abdominal wall and spinal cord.