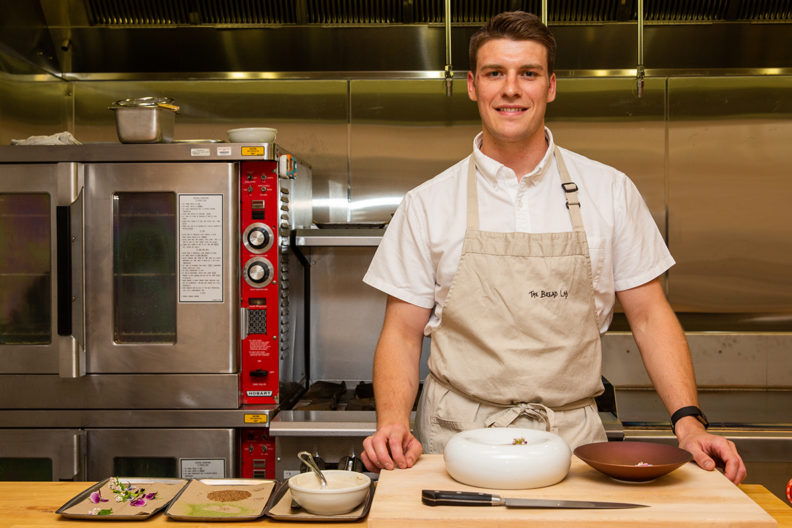 Hired earlier this year, the former sous chef at Seattle’s landmark Canlis restaurant develops dishes that bring The Bread Lab discoveries and the agricultural bounty of Northwest to the world.

“Niels really broadens the reach of our work,” said Kim Binczewski, managing director of The Bread Lab. Grains are just one part of the local agricultural and food economy, which the lab’s discoveries support far beyond bread and beer.

“Niels is here to help us showcase all of that variety to the greater Seattle community, as well as the farmers of Skagit and Whatcom counties,” Binczewski said.

Brisbane’s role at The Bread Lab is funded by a gift from Canlis, where he worked for the past four years. He specialized in researching new menu items: connecting with local farmers and artisans to create compelling new dishes. He brought fellow Canlis chefs to The Bread Lab for regular visits.

“That started my wheels turning,” Brisbane said. “The research that I’d been doing at Canlis is relevant to the entire food community. I saw The Bread Lab as a way to bring researchers and growers together with chefs to share ideas. I knew I needed to come here.”

The recipe for miso dates back to ancient Japan. But the barley and beans fermenting under a heavy bucket in Brisbane’s kitchen laboratory are pure Skagit County.

Barley isn’t as valuable as other cash crops, but regional growers rely on it as an important rotation crop that breaks up weed and disease cycles. Brisbane’s miso is one of the ways he’s finding new, valuable uses for barley, helping growers solve a challenge while giving chefs a new dish with an interesting Northwest spin.

Fermenting local barley with Koji — a fussy mold that requires precise temperature and humidity and frequent stirs — Brisbane presses the paste of local grains, beans and salt in buckets to age comfortably for months or years.

“Time does the rest,” Brisbane said. The end result is earthy, aromatic and slightly sweet. Brisbane suspects he may the only chef in Washington state crafting his own miso.

Nearby is a bottle of experimental maraschino cherries. Locally bred Black Republican cherry trees produce fruit that’s too small to sell commercially. As a cultivar, it’s really only used to pollinate more popular varieties like Bings and Rainiers.

As a chef, Brisbane loves working with farmers to find foods that are unique to the Northwest and help dishes stand out. That’s what makes cooking special, he said.

By sharing his dishes and discoveries, the end results are a stronger agricultural community, restaurants with better, more nutritious ingredients, and dishes worth traveling the world to taste.

“We’re taking our new discoveries, and forgotten products from Northwest farms and orchards, and turning them into valuable, premium foods with a story to tell,” Brisbane said. “The WSU Bread Lab is showing what can be done when people blend their ideas and vision.”