Stanford engineers have developed an electronic glove containing sensors that could one day give robotic hands the sort of dexterity that humans take for granted. Stanford researchers developed the skin-like touch sensors that enable this robotic hand to deliver just the right amount of pressure to lift and move a pingpong ball without crushing it.

In a paper published Nov. 21 in Science Robotics, chemical engineer Zhenan Bao and her team demonstrated that the sensors work well enough to allow a robotic hand to touch a delicate berry and handle a pingpong ball without squashing them.

“This technology puts us on a path to one day giving robots the sort of sensing capabilities found in human skin,” Bao said.

Bao said the sensors in the glove’s fingertips simultaneously measure the intensity and direction of pressure, two qualities essential to achieving manual dexterity. The researchers must still perfect the technology to automatically control these sensors but when they do, a robot wearing the glove could have the dexterity to hold an egg between thumb and forefinger without smashing it or letting it slip.

The electronic glove imitates the way layers of human skin work together to give our hands their extraordinary sensitivity.

Our outer layer of skin is imbued with sensors to detect pressure, heat and other stimuli. Our fingers and palms are particularly rich in touch sensors. These sensors work in conjunction with a sublayer of skin called the spinosum, a bumpy microscopic terrain of hills and valleys. 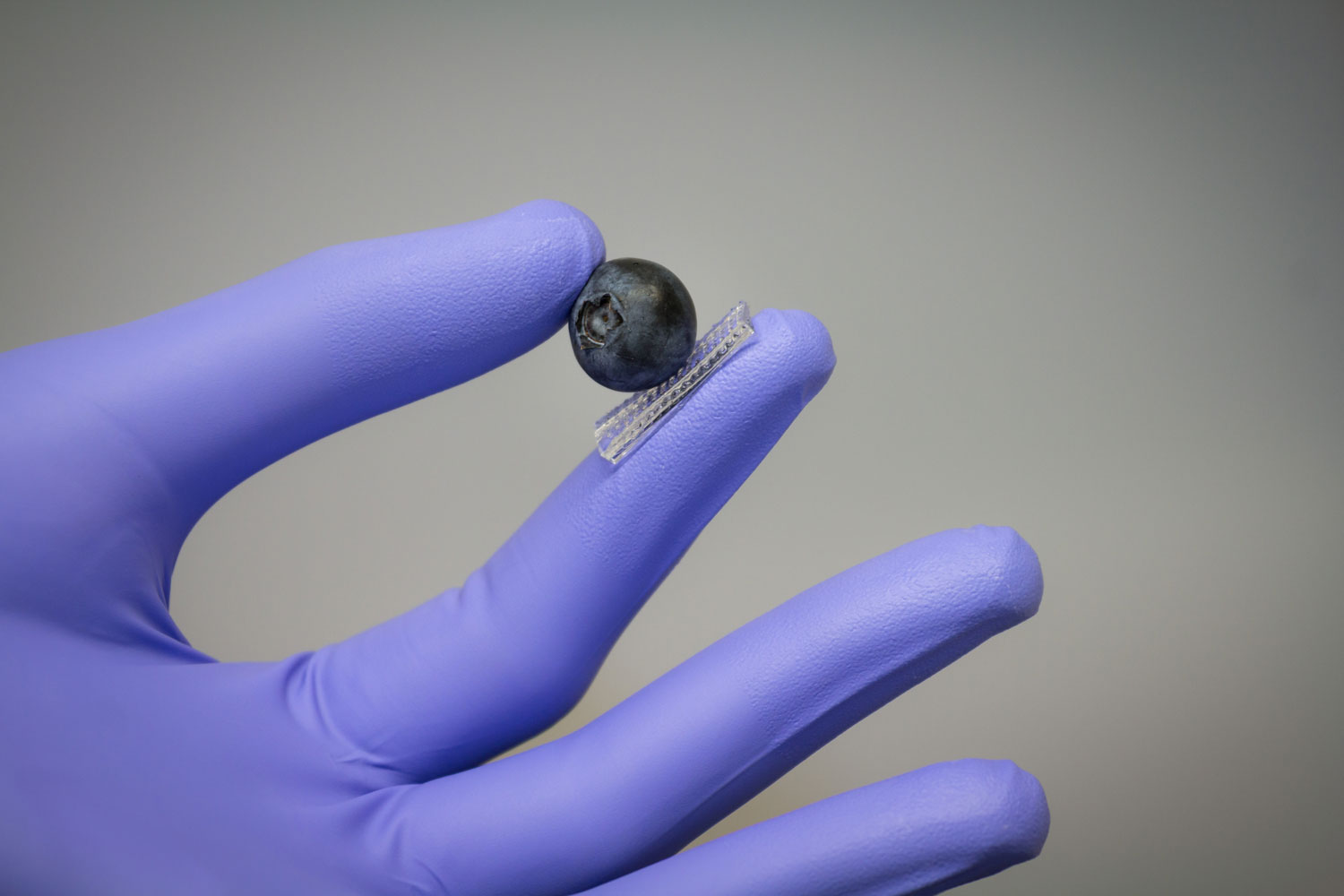 The sensor shown in this photo is sensitive enough to allow the finger to hold a blueberry without crushing it. In the future all the fingers and the palm would have similar electronic sensors that mimic the biological sensors in our skin. (Image credit: Courtesy of Bao Lab)

That bumpiness is critical. As our finger touches an object, the outer layer of skin moves closer to the spinosum. A light touch is felt mainly by sensors close to the hilltops. More intense pressure forces the outer skin down into the valleys of the spinosum, triggering more intense touch sensations.

But measuring the intensity of pressure is only part of what the spinosum enables. This bumpy sublayer also helps reveal the direction of pressure, or shear force. A finger pressing north for instance, creates strong signals on the southern slopes of those microscopic hills. This ability to sense shear force is part of what helps us gently but firmly hold an egg between thumb and forefinger.

Postdoctoral scholar Clementine Boutry and master’s student Marc Negre led development of the electronic sensors that mimic this human mechanism. Each sensor on the fingertip of the robotic glove is made of three flexible layers that work in concert. The top and bottom layers are electrically active. The researchers laid a grid of electrical lines on each of the two facing surfaces, like rows in a field, and turned these rows perpendicular to each other to create a dense array of small sensing pixels. They also made the bottom layer bumpy like the spinosum.

The rubber insulator in the middle simply kept the top and bottom layers of electrodes apart. But that separation was critical, because electrodes that are close without touching can store electrical energy. As the robotic finger pressed down, squeezing the upper electrodes closer to the bottom, the stored energy increased. The hills and valleys of the bottom layer provided a way to map the intensity and direction of pressure to specific points on the perpendicular grids, much like human skin.

To test their technology the researchers placed their three-layered sensors on the fingers of a rubber glove, and put the glove on a robotic hand. Eventually the goal is to embed sensors directly into a skin-like covering for robotic hands. In one experiment, they programmed the glove-wearing robotic hand to gently touch a berry without damaging it. They also programmed the gloved hand to lift and move a pingpong ball without crushing it, by using the sensor to detect the appropriate shear force to grasp the ball without dropping it.

Bao said that with proper programming a robotic hand wearing the current touch-sensing glove could perform a repetitive task such as lifting eggs off a conveyor belt and placing them into cartons. The technology could also have applications in robot-assisted surgery, where precise touch control is essential. But Bao’s ultimate goal is to develop an advanced version of the glove that automatically applies just the right amount of force to handle an object safely without prior programming.

“We can program a robotic hand to touch a raspberry without crushing it, but we’re a long way from being able to touch and detect that it is raspberry and enable the robot to pick it up,” she said.