Boys should get HPV jab to protect against cancer, health advisers say

Boys should get HPV jab to protect against cancer, health advisers say

An injection that protects against cervical cancer should be given to boys as well as girls, advisers have told health ministers. The Joint Committee on Vaccination and Immunisation (JCVI) has recommended a “gender-neutral” vaccination programme to protect against the sexually transmitted infection human papilloma virus (HPV).

The HPV vaccination has been routinely offered to girls aged 12 to 13 and provided free on the NHS up to the age of 18, but there have been growing calls to extend immunisation to boys.

The JCVI said: “If considering a cost-effectiveness analysis where a combined girls’ and boys’ programme is compared to no vaccination, gender-neutral HPV vaccination is highly likely to be cost-effective.” 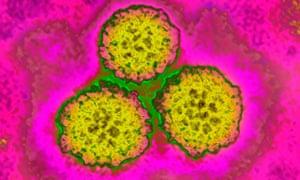 The human papilloma virus is commonly associated with causing cervical cancer but it can also cause mouth and throat cancer and genital warts. Photograph: BSIP/UIG via Getty Images

The Department of Health has been urged to act quickly on the final report.

Peter Baker, the director of the campaign group HPV Action, said: “The JCVI’s advice that boys should be vaccinated is very welcome news for boys and their parents. It will also benefit those girls who, for whatever reason, have not been vaccinated against HPV.

“We have waited a very long time for this announcement and it is now imperative that ministers accept the JCVI’s advice without delay.

“HPV Action believes it is entirely realistic for the vaccination of boys to begin by September 2019 at the latest.”

There are hundreds of strains of HPV virus, and most are harmless, but about 12 types can cause cancer. HPV has been most commonly associated with cervical cancer, but could also cause mouth and throat cancer, among others, and genital warts.

Boys were said to benefit from the current scheme through “herd protection”, but men who have sex with men and not women do not gain protection.

Countries such as Australia have already begun vaccinating boys.

“It has been frustrating that this effective vaccine has, until now, only been available on the NHS to girls but not boys. We hope parents will take up this important opportunity to get their sons and daughters vaccinated as soon as it is available to them.”

A health department spokeswoman said: “The government takes advice from an independent expert committee – the Joint Committee for Vaccination and Immunisation – when making decisions on vaccination programmes. We are carefully considering their advice and will update on a decision shortly.”