Tattoo health warning for people with weakened immune systems: A woman with cystic fibrosis and lung transplants suffered chronic pain for three years after she had a tattoo on her thigh

Home/ Tattoo health warning for people with weakened immune systems: A woman with cystic fibrosis and lung transplants suffered chronic pain for three years after she had a tattoo on her thigh

Tattoo health warning for people with weakened immune systems: A woman with cystic fibrosis and lung transplants suffered chronic pain for three years after she had a tattoo on her thigh

Getting a tattoo if you have a weakened immune system could put you at risk of complications, doctors have warned. The caution comes after a woman with cystic fibrosis and lung transplants developed thigh and knee pain after having body art inked on her thigh.

Doctors say those taking immunosuppressant drugs should take precautions if considering body art. These medicines are often given after an organ transplant or to treat autoimmune conditions such as Crohn’s disease, lupus or rheumatoid arthritis. Others who may have weak immune systems include those with chronic long-term conditions such as diabetes. 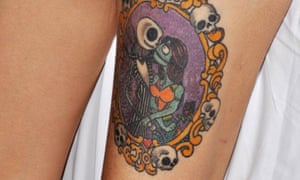 Doctors are warning that people with chronic conditions such as cystic fibrosis, Crohn’s disease, lupus, or rheumatoid arthritis, should think carefully before getting inked. Photograph: BMJ

“We know that in those individuals, the risk of infections is higher when you have any procedure, whether it is planned surgery or tattoo or piercing, so we would say in those instances that you should consider carefully – speak to your doctor if you are not sure and make sure that the person you are getting the tattoo done from is suitably qualified and follows all practice to keep everything sterile,” said William Wilson, a specialist registrar in trauma and orthopaedics at the Queen Elizabeth University Hospital, Glasgow, and a co-author of the report.

Writing in the journal BMJ Case Reports,Wilson and colleagues describe how the 31-year old woman was referred to a rheumatology clinic in Glasgow 10 months after getting a large tattoo of characters from the film The Nightmare Before Christmas on her thigh. Her knee was swollen and she had pain in her leg adorned with the tattoo that was affecting her sleep.

“It was really in the front of the thigh, in the quads and going down towards the knee, and weakness in her quads,” said Wilson.

While she had had a tattoo on her other leg some years before with no problems, the woman found that just over a week after getting the new tattoo she was in pain that was so bad it had to be controlled with the synthetic opioid pain medication tramadol, as well as paracetamol and the painkiller nefopam. She was also taking immuno-suppressents, to manage the lung transplants, and insulin for cystic-fibrosis related diabetes.

Nothing unusual was seen through blood tests or from x-rays, while tests on fluid from the knee did not show any sign of infection by bacteria or fungi. However, MRI scans showed that one of the thigh muscles was inflamed. A biopsy of the muscle also showed no sign of infection, but confirmed the muscle inflammation.

“We can’t absolutely prove it was due to the tattoo but because of the timing firstly, with the symptoms coming on one week after she had the tattoo, the location being right underneath where she had the tattoo, it led us to imply there is a link there having exhausted all other lines of inquiry,” said Wilson.

“Nobody knows in most cases what causes inflammation in the muscle, the implication is that it could be something like bacteria that has got in there, or it could be a reaction to a toxin – such as perhaps the ink,” he added.

The woman was given physiotherapy and a year after having the tattoo the situation got better, with the team noting that after three years she had no further pain.

The team recommend that doctors should raise possible risks of tattooing with patients, and consider the impact of tattoos when diagnosing conditions – noting that, while the only reported instance, the woman’s muscle inflammation might not be the only case of its kind.

“This could be a rare occurrence or represent an under-diagnosis for patients presenting with similar symptoms and having had tattoos,” they write.