Stanford researcher and former chief of security at Facebook Alex Stamos called for more cooperation between technology companies and the government, more interdisciplinary research into cybersecurity issues and a federal online privacy law during a lecture at Stanford on Tuesday.

The internet today is not an all-powerful democratization tool that its founders thought it would become, said Stamos, an adjunct professor at Stanford’s Freeman Spogli Institute for International Studies and a visiting scholar at the Hoover Institution. 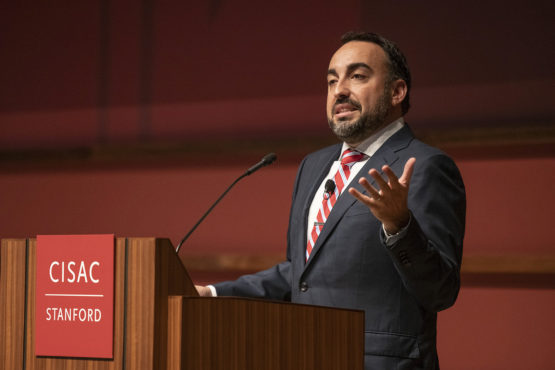 Cybersecurity issues, such as the tension between online privacy and safety, abound and roadblocks impede the ability to solve these issues. Among the roadblocks, Stamos said, have been technology companies’ unwillingness to cooperate with the government and the continued positive rhetoric from tech executives about their products.

“Silicon Valley is based on optimism,” he said. “But (technology companies) never, ever talk about the downside. And the truth is the world is actually kind of a dark place… and if you build technology, it will be misused. And it’s not bad for us to admit that.”

Stamos’ speech, titled “The Battle for the Soul of the Internet,” was delivered as the annual Drell Lecture, an event organized by Stanford’s Center for International Security and Cooperation (CISAC). The lecture is named for the late Sidney Drell, a theoretical physicist and arms control expert who was a co-founder of CISAC and former deputy director of the SLAC National Accelerator Laboratory.

Prior to joining Stanford, Stamos served as the chief security officer at Facebook for two years until leaving the social networking company in August. During his time at Facebook, he led the company’s investigation into manipulation of the 2016 U.S. election and helped create several protections against these new classes of abuse. In 2017, he co-authored “Information Operations and Facebook,” a highly cited examination of the influence campaign against the U.S. election.

The current complexities and tradeoffs of issues such as online privacy, safety, anonymity and integrity of information require technology companies, social scientists, governmental officials and others to work together, Stamos said.

“We have some serious problems we have to work on,” said Stamos, who is also a William J. Perry Fellow at CISAC. “But we also have to focus on the fact that the internet is one of the most powerful tools for human freedom and democratization ever created. That is a feature we can still have if we are very careful in asking for it.”

Stamos encouraged the next generation of technology leaders to be educated on cybersecurity and be informed about the history and past mistakes of big tech companies, so they are not doomed to repeat the mistakes again.

He also called for extensive interdisciplinary research into issues that intersect society, policy and technology – some of which is already under way at Stanford.

“One of the real reasons that I believe we’re not well prepared for a secure election in 2018 or 2020 is because we are not working off of the same set of facts that we had in 2016,” said Stamos, adding that he is part of a team at Stanford that is studying intelligence failures that happened during the 2016 U.S. election.

Stamos also highlighted the importance of journalism to a healthy democratic society and placed some of the blame for the economic struggles of local newspapers on technology companies.

“Our society will not be healthy if we don’t have a good economic model for journalism,” Stamos said. “And a lot of that lies on the shoulders of Silicon Valley. Nobody wanted to destroy the newspaper industry, but this was a consequence of allowing anyone to be a journalist and taking away the economics of things like classified (advertising)… And unfortunately, nobody in the Valley has stepped up to fix it.”

Following the lecture, Stamos answered several questions from the audience and held a conversation with Andrew Grotto, a social science research associate at CISAC.

Stamos praised California’s digital privacy law, which was passed in June, and said he believes the country needs a federal privacy law and a new independent governmental agency that enforces its rules.

The law, called the California Consumer Privacy Act, gives consumers a host of rights related to online privacy, including the right to find out what data companies have collected on them and what they do with the data.

“I think it’s great that California passed that law because it now forces Congress to act,” Stamos said. “But I do think we need a federal override (…) and we need a federal regulator team that is technically competent to interpret it.”