It might seem like the only thing anyone could do with forensic DNA is match suspects to crime scenes. After all, agencies like the FBI don’t track the same kind of genetic information as health or ancestry databases like GEDmatch or Ancestry.com.

But that view is starting to erode. Now, Stanford biologists have shown police could use forensic DNA to track down a suspect’s relatives in genealogy databases that store a different kind of genetic data – and that were never intended for use in police investigations. 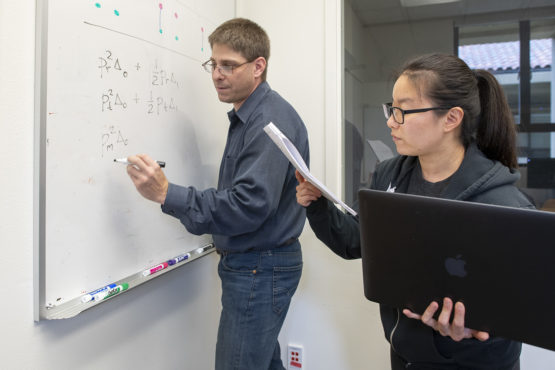 Professor Noah Rosenberg, left, and postdoc Jaehee Kim discuss the math behind a new approach to tracking down relatives in genealogy databases based on forensic DNA. (Image credit: L.A. Cicero)

In other words, if your sibling leaves DNA at a crime scene, it could lead detectives to your door. That suggests new investigative possibilities for police – and also new concerns about genetic privacy and whether authorities who use forensic DNA in creative ways might be overstepping their bounds, said Noah Rosenberg, a professor of biology and senior author of a study revealing this connection published Oct. 11 in Cell.

“The potential to link people’s genotypes across databases has been developing for some time. It is both of interest and concerning, depending on one’s point of view,” said Rosenberg, who is a member of Stanford Bio-X.

For Rosenberg and colleagues, the study began with a purely scientific question: If they had a small number of one kind of genetic markers from one person, could they find that same person’s record in a database containing an entirely different kind of genetic data? The answer, they reported last year, is yes. Based on the 20 genetic markers that form the basis of the FBI’s Combined DNA Index System, the researchers were able to find individuals in other datasets and, as a result, accurately infer hundreds of thousands of a different kind of genetic markers – ones that do reveal ancestry, health information and even some details of a person’s appearance.

What’s more, that second set of genetic markers is the same kind used in genealogy databases, an observation that got Rosenberg, postdoctoral fellow Jaehee Kim and colleagues wondering: Could they somehow use forensic DNA markers, like those typed by the FBI, to track down someone’s relatives in a genealogy database intended to help people learn about their ancestry and find relatives?

The answer is yes, at least some of the time. To figure out roughly how often, Rosenberg, Kim and team needed to perform an involved calculation, akin to figuring out how often close relatives share genetic traits and how likely it is that a single person has two seemingly unrelated traits, such as green eyes and a high risk of colon cancer. By doing those computations for many combinations of traits, it’s possible to figure out how likely it is that a person in a health or genealogy database is related to someone in a forensic database.

Legal and policy experts should be aware of the links that are possible to make between relatives by combining data from different databases.

In the final calculation, the method works OK – well enough, Rosenberg said, that it could be a way to generate leads and that it exposes a new basis for concern about unanticipated links between databases. The team estimates that with forensic markers from one person, they could correctly identify a person’s close relatives – parents, siblings and children — about a third of the time in a proof-of-principle sample of several hundred people.

The results raise both new investigative possibilities and new genetic privacy concerns, similar to those raised after the recent arrest of a suspect in the Golden State Killer case. In that case, detectives used a new analysis of a frozen DNA sample to track down relatives, including someone who shared a great-great-great grandparent, of the suspect – and, dozens of family trees and thousands of cousins later, the suspect himself.

The new results suggest another way to generate leads, based on forensic profiles rather than new tests of frozen DNA, while at the same time raising some of the same privacy concerns as the Golden State Killer case did, namely that data collected for biomedical research or simply a personal interest in one’s ancestry could expose a person to police investigation. In particular, while people who have uploaded genetic data to medical, ancestry or genealogy databases have agreed to let others search those records, their relatives have not agreed to allow police to search that potentially sensitive information.

That, Rosenberg said, means there is cause for greater awareness of the issue. “There’s a lot of concern about relatedness profiling in general,” he said. What to do about it is a big, open question, “For that larger conversation, legal and policy experts should be aware of the links that are possible to make between relatives by combining data from different databases.”