UW atmospheric scientists to study most extreme storms on Earth, up close

Home/ UW atmospheric scientists to study most extreme storms on Earth, up close

UW atmospheric scientists to study most extreme storms on Earth, up close

Two University of Washington atmospheric scientists are leaving for a weeks-long, firsthand study of some extreme storms on earth.

They will participate in RELAMPAGO, an international campaign in Argentina to monitor storms that occur east of the Andes near the slopes of another mountain range, the Sierra de Córdoba. The international team hopes to better understand how convective storm systems — the big systems that unleash torrential rains, hail and lightning — initiate and grow as they travel from the mountainous terrain eastward over the plains.

The campaign, led by the University of Illinois and primarily funded by the National Science Foundation, will run Nov. 1–Dec. 15. The name comes from the Spanish and Portuguese word for lightning.

“From looking at the satellites, scientists have noticed that this area of South America had the most extreme storms in the world, in terms of how tall they get, the frequency of lightning and the frequency of hail,” said Angela Rowe, a UW research scientist in atmospheric sciences who is the UW’s principal investigator. 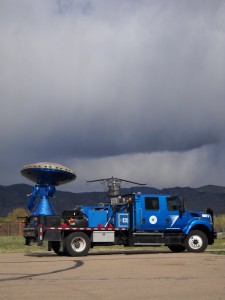 The Doppler-On-Wheels radar can monitor storm systems from the ground.Colorado State University

Rowe is part of the team using three Doppler-On-Wheels, a radar dish loaded on the back of a pickup truck, to monitor precipitation and wind. The instrument bounces waves off drops of water and ice to measure the size of the particles and get a detailed look at wind speeds and direction.

In 2015, Rowe helped operate a single one of these instruments as part of the UW-led OLYMPEX field campaign to observe storm systems over the Olympic Peninsula and test a new NASA precipitation satellite. This effort will also compare observations with that instrument, and an even newer National Oceanic and Atmospheric Administration weather satellite that includes lightning tracking, to see their sensors perform in situations — like hail and lightning that continues well into the night — that may be unique.

“Chasing the world’s most powerful thunderstorms” – University of Illinois, June 2017

Lynn McMurdie, a UW research associate professor of atmospheric sciences, will coordinate the daily weather briefings during the 45-day campaign. Her team will include a UW graduate student, other U.S. and Argentine graduate students, and members of Argentina’s national weather service. The team already has started making practice forecasts as a warmup for the event. During the campaign, the team will issue a morning forecast of where storms are likely to hit, their intensity and longevity over the next 24 hours, and researchers will then position their equipment accordingly. Forecasts will be updated in late afternoon to aid in planning the next day’s operations.

The team will occupy a hotel in the tourist town of Villa Carlos Paz, using a hotel’s banquet room as a center of operations.

Safety is a priority, the researchers emphasize. The team wants to collect firsthand data but won’t send members into harm’s way. Researchers will use hail pads and social-media reports to verify severe weather conditions throughout the region. 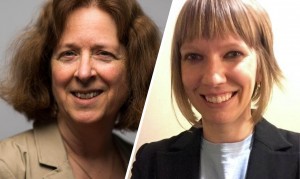 One focus will be watching the storms evolve over time. In parts of the U.S. like Colorado that experience similar storms, Rowe said, systems usually develop in the afternoons and generally only last a few hours; after the storms initiate near the Rocky Mountains, they travel eastwards over the Great Plains and often grow into large convective systems over an area too large to adequately observe from the ground.

“In Argentina, you have a situation where you can observe these systems well,” Rowe said. “You can get additional information well into the lifecycle that you couldn’t in the U.S.”

This terrain will let the team study long-lasting storms that are very intense, fueled by moisture from the Amazon Basin, and are easier to monitor over long periods.

“I am excited,” Rowe said. “Not that I don’t love West Coast rain, but this will be exciting — there’s never been this sort of data collected before in this region.” 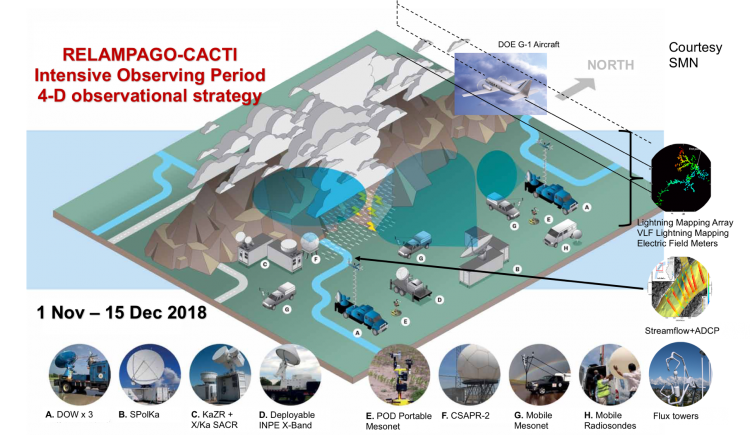 A graphic of all the monitoring equipment. A UW atmospheric scientist will help with the Doppler-On-Wheels, seen in the lower left.Kristen Rasmussen/Colorado State University

The full set of monitoring equipment includes ground-based weather radars, weather balloons, a ground-based lightning detection array, a research aircraft, ground-based weather stations and observation pods that can be quickly deployed from trucks. Different parts of the campaign are funded by NASA, NOAA, the U.S. Department of Energy and science agencies in Brazil and Argentina.

The local community stands to benefit from the effort. Central Argentina is the wine region, and vineyard owners cover their crops with nets to protect the vines from the frequent hail. Understanding the processes that create the hail and flooding events will help the local community forecast these events and better prepare for them. But it also promises to answer basic questions about storms.

“This is really fundamental science,” McMurdie said. “There are some really basic questions, and it’s a big opportunity to collect the data. We just hope the weather cooperates.”