Women will be urged to get tested for cervical cancer in a high-profile campaign prompted by alarm among doctors at a sharp rise in those ignoring invitations to be screened.

The campaign will launch early next year to mark the 10th anniversary of the death of Jade Goody from cervical cancer in March 2009, the reality TV star whose death led to a surge in the number of women getting checked. 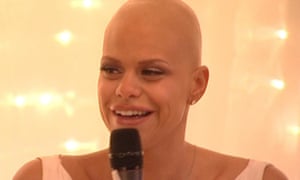 Jade Goody. Experts say the effect the reality TV star’s death had on testing numbers has worn off. Photograph: Living/PA

It will be the first time the NHS has sought to raise awareness of a disease that 3,000 women a year are diagnosed with and which kills about 850 a year.

Public Health England is running the campaign because the proportion of women having cervical screening tests – formerly known as smear tests – has fallen to its lowest level in 20 years.

Screening is offered to all women aged between 25 and 64 and PHE’s target is to ensure that at least 80% turn up. But only 72% did so in 2016-17. Almost 1.3 million women – the largest number on record – did not attend. The percentage of women choosing not to attend screening appointments has been rising since 2010.

Officials are concerned at the numberof women in their 20s choosing not to attend. Barely three out of five – 62% – of women aged 25 to 29 attended for screening last year.

“Sadly we are seeing attendance continually decrease and if this does not change we are going to see more diagnoses and deaths which could have been prevented.”

“It is of real concern that fewer women, particularly younger women, are taking screening up. Over a third of women under 30 are not taking the test,” said Prof Anne Mackie, PHE’s director of screening. “We know that, for some women, worries about embarrassment or discomfort can put them off. If they are concerned, they can ask a GP, who can explain what’s involved and help them make a choice about screening.”

Officials stress that a screening appointment should only take five minutes and potentially abnormal cells are detected by using a small soft brush to collect them from the surface of the cervix. The cell sample is sent to a laboratory for analysis and the results are available within two weeks.

Music said: “Fear of pain is a barrier to attendance. This can be for many reasons including vaginismus, endometriosis or not being able to relax.” But women who are anxious can make the experience easier by asking the nurse to stop or to use a smaller speculum or an oestrogen cream for vaginal dryness, he said.

Prof Chris Harrison, NHS England’s national clinical director for cancer, said PHE’s campaign would be an important part of the NHS’s efforts to ensure people with cancer are diagnosed earlier and could therefore live longer.

Elliss-Brookes said the success of the drive since 2007-08 to immunise schoolgirls against the human papilloma virus (HPV) had lulled some young women into a false sense of security about their risk of developing cervical cancer.

“We know that one in 10 young women aged 25-35 think cervical screening isn’t important if you have had the HPV vaccine. However, while the vaccine prevents 70% of cervical cancers from developing, it does not provide full protection, so attending cervical screening is still really important for women who have been vaccinated,” said Music.

A screening expert who asked to remain anonymous said: “In recent years ‘the Jade Goody effect’ has worn off. Fewer women are now attending cervical screening. It can be an unpleasant experience for some women, but it only takes a few minutes of your time and can save your life.”