New drug uses immune system to wipe out deadly bacteria: Antibiotic-resistant bacteria are among those targeted by new ‘immunobiotic’

Home/ New drug uses immune system to wipe out deadly bacteria: Antibiotic-resistant bacteria are among those targeted by new ‘immunobiotic’

New drug uses immune system to wipe out deadly bacteria: Antibiotic-resistant bacteria are among those targeted by new ‘immunobiotic’

Scientists have created a new drug that hunts down and eliminates deadly antibiotic-resistant bacteria by engaging the body’s natural defences. Researchers at Lehigh University in Pennsylvania fused part of an existing antibiotic with a molecule that attracts antibodies unleashed by the immune system to fight invaders such as bacteria.

The “immunobiotic” targets a range of bacteria responsible for diseases such as pneumonia and food poisoning, including those that often become resistant to last-resort antibiotics.

“The inspiration came mostly from the recent success of cancer immunotherapy,” said Marcos Pires, who led the study published in the journal Cell Chemical Biology.

Cancer immunotherapy, which Pires described as “game-changing” for patients, also harnesses the power of the immune system, but to destroy cancer cells rather than bacteria. The team wanted to find out whether the immune system could be used to help antibiotics work more efficiently.

“We anticipate the resistance would be slower to develop because of the double mode of activity – both traditional antimicrobial activity and the immunotherapy,” Pires said. “It should provide fewer mechanisms to escape the actions of our agents.”

Pires and his team tested the new compound on a range of bacteria declared by the World Health Organization as high-priority because there are so few drugs that work against them. Among them were Pseudomonas aeruginosa, a common cause of pneumonia in cancer patients, burns victims and people with cystic fibrosis.

Tests on nematode worms infected with Pseudomonas showed that the drug successfully targeted and wiped out the bacteria.

By sticking to the bacteria, the drug can inflict direct damage while acting like a beacon for antibodies that arrive en masse to finish the job. In the body, bacteria that become coated with antibodies get destroyed by white blood cells.

The researchers based their compound on an existing last-resort antibiotic called polymyxin, which damages the outer surface of bacterial cells, making them burst and die. Growing evidence suggests that this last line of antibiotic defence is under threat, meaning there is an urgent need for new antibacterials.

The new immunobiotic drug binds to molecules on the surface of bacteria that are not found on human cells. While the drug has yet to be tested in humans, the researchers saw no signs of toxicity when it was tested on animal cells.

“We believe the expansive difference in cellular composition between bacterial cells and healthy cells will provide the necessary window of selectivity to target bacterial cells without affecting the healthy human cells,” said Pires. 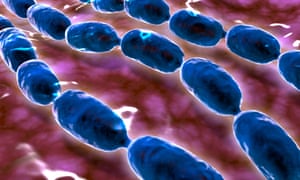 Upon testing the new drug in combination with an existing antibiotic to which the bacteria were already resistant, the researchers discovered their drug re-sensitised bacteria to the other antibiotic. This result suggests older antibiotics, previously thought to be on their way out due to widespread resistance in bacteria, could still be useful in combination with this new drug.

Tim McHugh, professor and director of the UCL Centre for Clinical Microbiology, said: “The idea of using a molecule which targets the outer membrane of bacteria to enhance their responsiveness to drugs or antibodies is very attractive.”

Immunobiotics, said Pires, “recruit antibodies that humans already have, so the advantage is that you don’t have to vaccinate the patient.”